What if My Brother is Too Good?

Little One Tears the Villain’s Script

Duke, Please Stop Because it Hurts

After Transmigration, The Male Lead and I had a HE

I Became The Childhood Friend of the Obsessive Second Male Lead

History at the Library

My Wife is My Life!

I’ll Be The Warrior’s Mother

“Really? Teacher Melleo gave this to our princess?”

When I clasped my hands together and acted utterly surprised, Haniel lowered her eyes primly. She stretched out her wing with the dried filefish Lady Melleo had given her in a manner that was quite different from this morning.

“Ohh, so you’re saying the other friends in your class all got carp fish jerky, but only our princess got this most delicious dried filefish?”*

When even professional translator Selene chimed in enthusiastically, Haniel’s shoulders swelled. Just this morning, she had been in tears because she hadn’t wanted to go to school, but something must have happened during class for her to be this energetic now, starting with the way she walked.

And I knew more than anyone else what had happened.

My chin propped up on the palm of my hand, I rolled my fingers on top of my lips, close to bursting with laughter.

“Teacher Melleo even praised you in front of your friends, right? That Haniel did well?”

She must’ve been waiting so long to say this—Haniel spun her tail around and around. As if she was trying to find the cause of this herself, the three-year-old’s actions became more careful.

You sly swan, fishing for compliments!

Really, when she was acting coy with an expression that was not displeased like this, she was a carbon copy of her brother.

Now that I look back, I saw nothing of Rashid on top of that hill afterwards.

When I’d looked at him as soon as I hugged Haniel, he was definitely under the tree, but when I’d gone back up in time with the day-end assembly, he had disappeared without a trace.

‘I really can’t understand him at all.’

It wasn’t like I’d go looking for him again, and he wasn’t a man you could just look for as you’d like. And like that, I was on the way home with Haniel after she was done with the assembly, when…

[Teacher Merong said I did well!]

Having been praised by Lady Melleo for the first time in her life, Haniel didn’t close her mouth all the way back home.

Maybe because she was amazed, at times she would shake her head rapidly or stop on her way, and checked her dried filefish multiple times.

[Mommy, dis one only Haniel!]

“Yes. That’s right. She only gave this to Haniel.”

Perhaps it was fortunate that Rashid had disappeared, since I was so busy just listening to Haniel boasting like this. I did feel a little, just a teeny tiny bit disappointed, but that was probably because I wasn’t able to show Haniel acting cute.

Right. What more could there be.

[Madam, when I saw Lady Melleo earlier, her shoulders were held as high as the sky. Did you know the wings and legs she bandaged up for the past few days because ‘it hurt’ healed completely just like that?!]

Selene, who’d kept by Haniel’s side in my stead during the day-end assembly, grabbed at her belly like she found something hilarious.

[Anyways, she was preening like that as if His Highness bestowed some medal to her or something. And then she started complimenting our princess in front of the whole student body so much that I was feeling embarrassed, you know.]

“Really? What a shame. I should’ve gone and listened, too.”

What have I missed out on thanks to an ill-mannered man who just up and disappeared?

“What did she say? Did she say something about her extraordinary grace and how unique she is?”

“Goodness gracious. What’s gotten into this gran- this teacher.”

After acting all firm like that, to think she would go around being so obvious.

Though I couldn’t tell whether she was a true teacher or a true noble, it was fortunate that she was feeling better. Thanks to that, Haniel had been reenergized, so she wouldn’t be sniffling because she didn’t want to go to school anymore.

And if the other problem solved itself nicely, too, that would be even better.

“Haniel, Teacher Melleo made you feel very happy today, right? She gave you lots and lots of compliments?”

“That’s because our Haniel really is a lady, but also…..”

I brought Haniel into my arms again as she licked at a speck of the dried filefish.

Who would think that she was a princess brought up in a palace!

She looked so pitiful, the way she couldn’t bring herself to take huge bites because it was too dear for her, instead ripping it into thread-like strips as she ate it.

“Oh, there’s also the fact that Haniel’s oldest brother put in a good word for you, too.”

If in Korea, we had a side character spewing out orange juice,* in Rohann we had a baby swan spitting out dried filefish.

*T/N: One of the commonly used memes in Korea is a scene from a Korean soap opera where, upon hearing shocking news, this one character spews out orange juice. (Example provided below, lol) 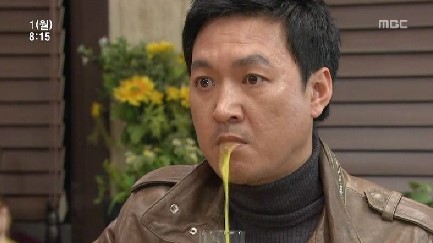 Want to read more chapters and support us? Please consider becoming a patron to read up to 2 chapters in advance!

I’ll Be The Warrior’s Mother

After Becoming the Hero’s Ex-fiancée

Register For This Site.

Please enter your username or email address. You will receive a link to create a new password via email.